The concept of Data journalism is not entirely new. Living, as we do, in a digital world has encouraged people to use data more often than they once did, and even to trust numbers more than words. Data journalism lies somewhere between common journalism and the opportunities that the world of data opens for it. It is the area where words meet numbers.

The main purpose of data journalism is to explain complex things using simple and engaging stories; showing people the gist; selecting the important points readers should be informed about.

As long as we have now accepted we are data-driven, and that we are going to tell you about data, we will allow statistics to speak for us first: The authors of the Data Journalism Handbook spoke with a great number of specialists in the sphere. These are the most insightful quotes they gathered. They leave no doubt about the importance of visualizing data.

Paul Bradshaw, who leads the MA in Multiplatform and Mobile Journalism at Birmingham City University, says that, "Data journalism can help a journalist tell a complex story through engaging infographics. Hans Rosling’s spectacular talks on visualizing world poverty with Gapminder, for example, have attracted millions of views across the world. And David McCandless’s popular work in distilling big numbers — such as putting public spending into context, or the pollution generated and prevented by the Icelandic volcano — shows the importance of clear design at Information is Beautiful."

Sarah Slobin, a visual journalist and a senior graphics editor with The Wall Street Journal, declares, "We can paint pictures of our entire lives with our digital trails. This universe of data can be surfaced to tell stories, answer questions, and impart an understanding of life in ways that is currently surpassing even the most rigorous and careful reconstruction of anecdotes."

Visualization: How to Reflect Data

It’s a noticeable fact that visualization is one of the most frequently used tools of data journalism. It helps authors share data with people in simple forms. Statistics can be fascinating when displayed as infographics. The secret of its success lies in the perception mechanisms. Most people are ‘visuals’ and it’s much easier for them to perceive information through the use of images. What’s more, gathering all necessary data into one picture saves time as it transmits the most information in the shortest time.

It was so in early 2010’s, and visualization is still in trend today. Studies of the latest tendencies in data visualizations confirm this fact.

Data can not only be visualized with simple graphs and statistical charts. According to Duke University, there are seven categories of visualization that include specific types.

The most often used are: If you are not sure which to choose, visit the Datavizcatalogue site. It offers an extensive list of visuals with explanations.

There is no need to be a designer to visualize data creatively and accurately.

This software is usually named as an example of one of the best data visualization tools, and it’s for a reason. First, it is the most popular among journalists, data scientists and analysts; more than 57,000 people use it. This solution can produce both static and interactive graphs, infographics and other visualizations. They benefit from AI and machine learning apps which allow the processing of large datasets and perform complex operations with statistical data. What’s more, Tableau is integrated with MySQL, Amazon AWS, SAP, and other databases. The chief advantage of this app is the easy-to-use interface.

This is an example of an interactive graph by Tableau: 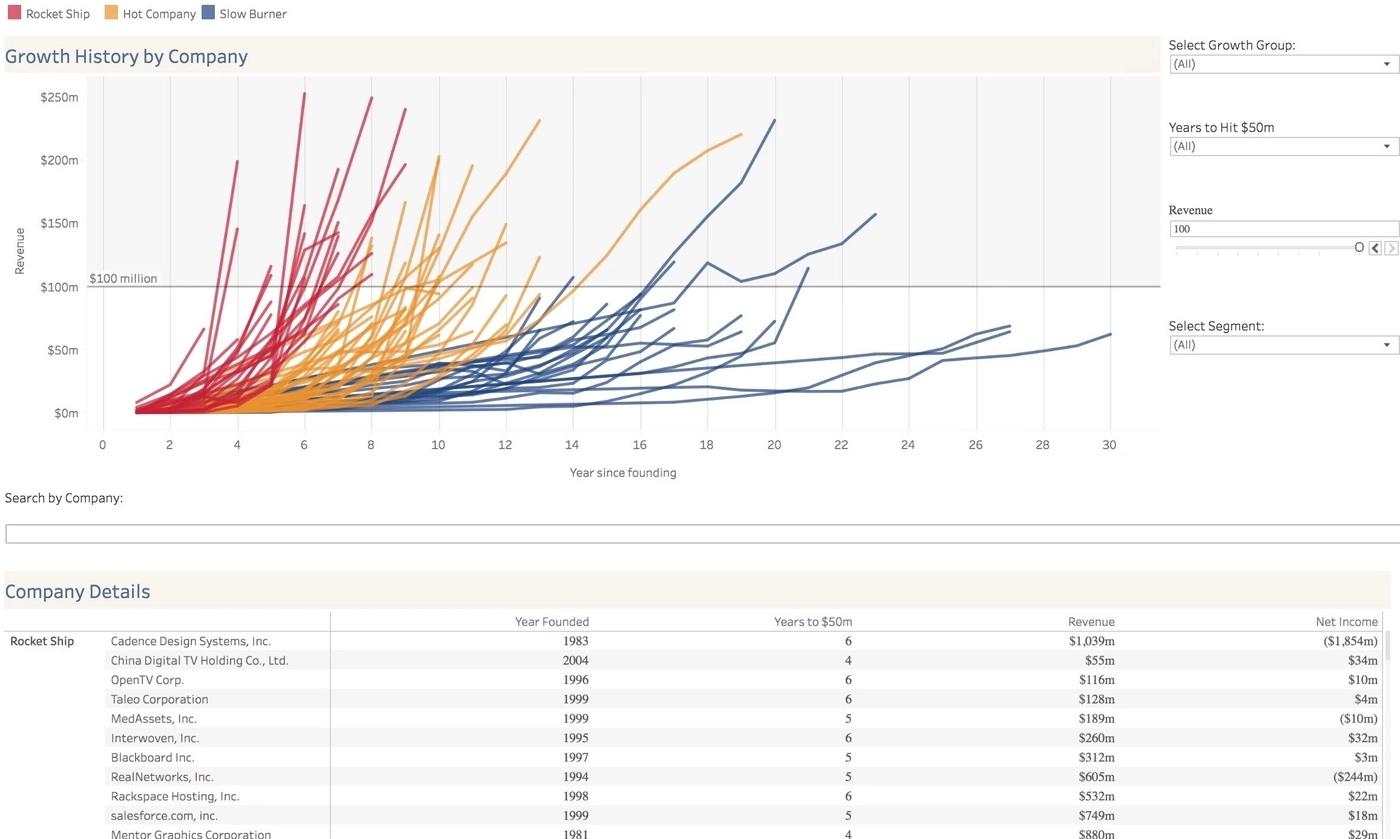 This open-source solution suits advanced specialists who know how to use JavaScript libraries. It runs on HTML, CSS and SVG. It generates fast and beautiful data visualizations, though not everyone will be able to use it. Note it is a powerful, innovative feature with no pre-built charts, and it is supported by IE9 and later.

There is a gallery with examples, and the following is what a treemap, made with D3.js, looks like: 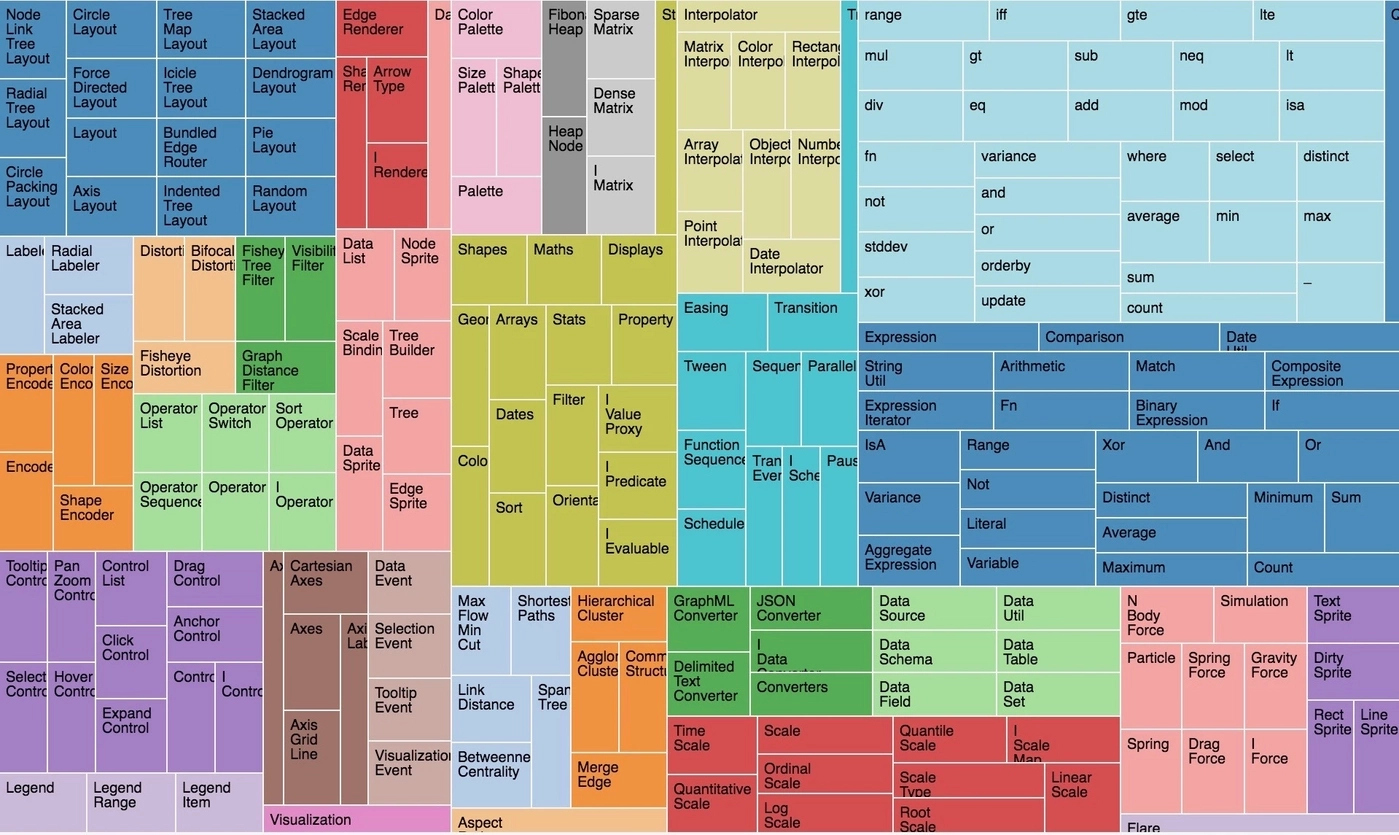 As with every Google feature, Charts runs on HTML5 and is compatible with all existing browsers, even old IE browsers. Charts and graphs can be both static and interactive (including zoom).

The diversity of possible visualization types can surprise as they offer everything from common histograms and bar charts to maps and sankey diagrams. This is another powerful JavaScript-based tool for visualizing data. It offers more than 90 types of charts and operates various platforms and frameworks that give users a great deal of flexibility. There are tons of live templates and examples, so it’s not very difficult to create a chart of infographics from scratch. Users simply need to add their data to create an understandable visualization. 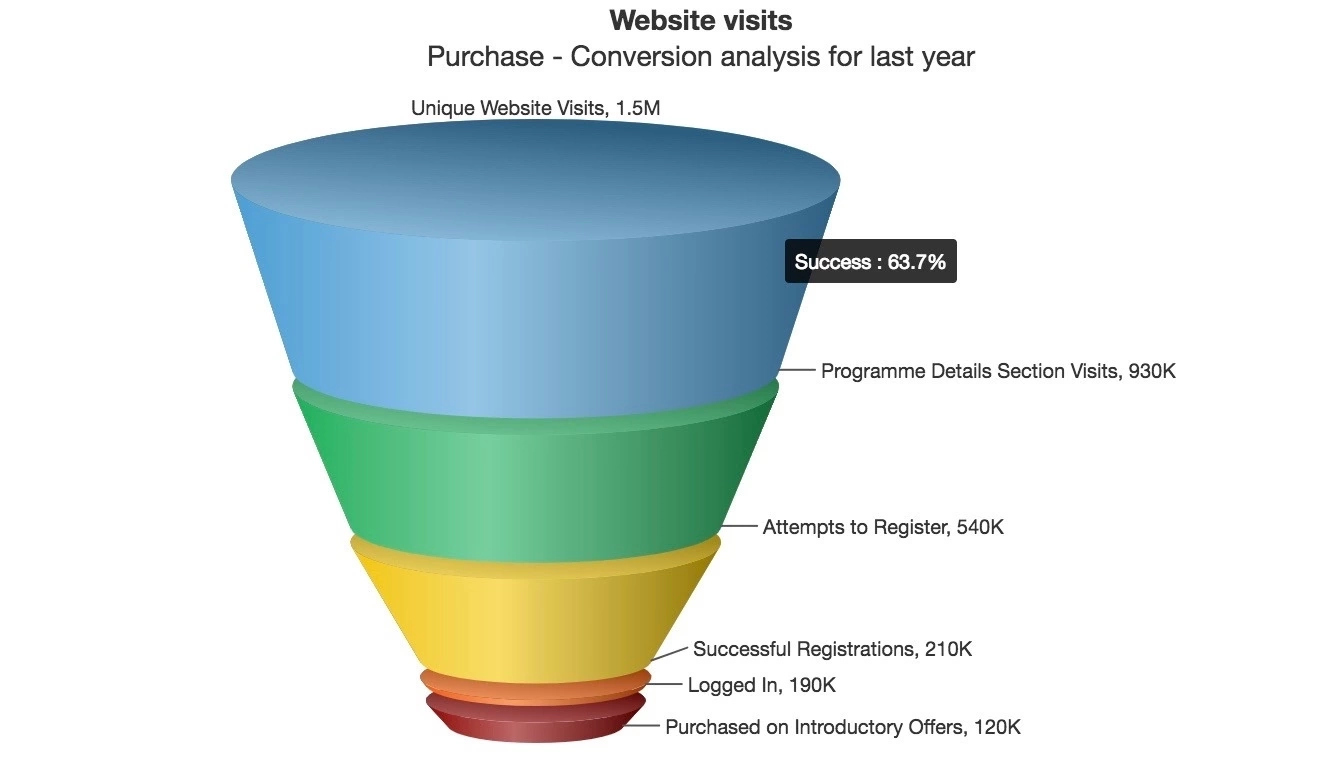 This tool is increasing in popularity among digital media companies as it is simple and can be frequently used for visualizing data fast. A clear and easy-to-use interface helps users create visualizations with a couple of clicks. It’s necessary to upload a CSV table with data, and the app will create charts or maps.

Here is an example of a chart demonstrating a higher risk of job automation in lower paying jobs: These are not the only ones, you can find others and choose what suits your needs the most.

Practical advice is always the best way to finish any article so here are some lifehacks on how to visualize data effectively.

Hans Rosling, who leads the ‘The Joy of Stats’ documentary on BBC, created this video infographics: Brian Solis, author and digital analyst at the Altimeter Group, updated his ‘Conversation Prism’ based on the situation existing on social media since 2008. Active satellites on the Earth orbit is an ‘edutainment’ visualization created by David Yanofsky and Tim Fernholz.

What Powers the World? by GoCompare, is an interactive visualization which allows you to choose what to monitor. Geographical stats are popular because of their importance; an importance that is growing along with the progress of technology. The informative Ecoregions 2017 app, developed by Resolve, shows 846 regions. And it looks stunning!

Nikon has done great work in creating a map of the sizes of all objects in our universe. These ‘comparing’ infographics can be explored for hours. Data has never seemed so fascinating. 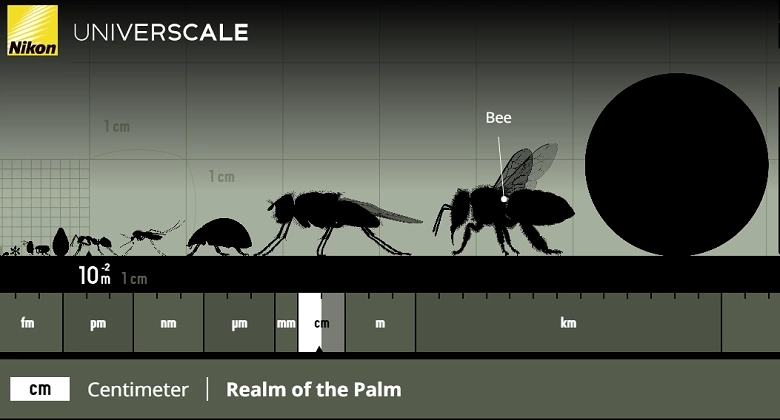 Data visualization can also be interactive, and Nicky Case, who uses graphics to explain how the world works, proved this by creating a game about the evolution of trust. It is engaging and teaches players a great deal. What happens depends on users’ choices, and then a little moral of the fable appears.

The ‘Lunar Conversations’ project, constructed by Nicholas Rougeux, is a timeline of the interaction between Earth and the Apollo 11 spacecraft mission from liftoff to splashdown. 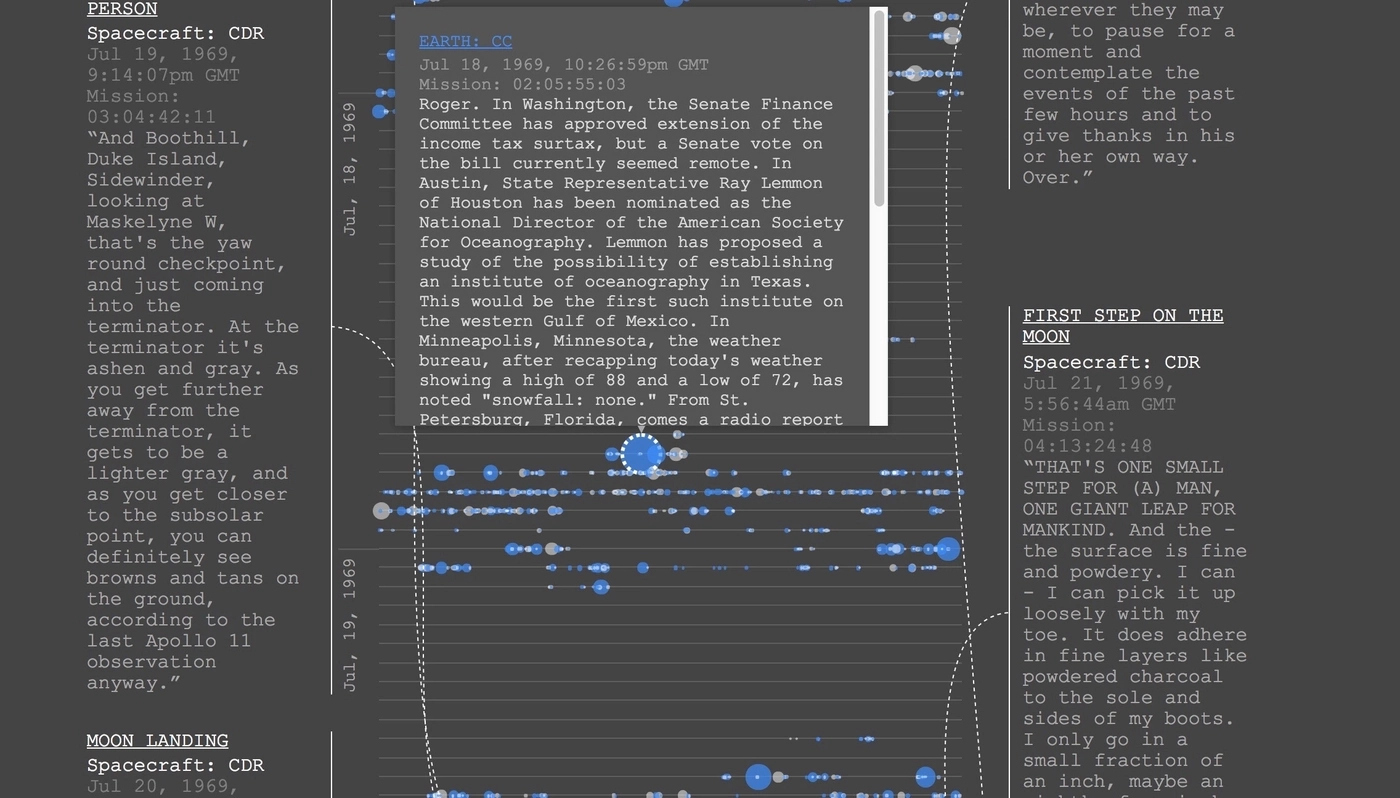 These are not the only great examples of data visualization. There are many examples of wonderfully visualized data. So explore, experiment and create.