In early 2016 one of Sweden’s largest publishers, MittMedia, defined a vision for the coming years — to become truly consumer-oriented.

MittMedia identified two principal obstacles that had to be overcome, should their plan and strategic vision be attained.

First, content consumption insights were ‘trapped’ within data science teams and had to be communicated before they could turn into action. Data insights had to become decentralized and become immediately available to the entire team, regardless of department or role. 7 Things Learned in the Process

1. The True Value of Data Is in Its Use

Reports don't have to be fancy to be impactful. Contrary to popular opinion, revolutionary business impact does not come from revolutionary insights or deep statistical analysis.

Revolutionary business impact comes from analytics insights being in the right place, at the right time and in a fitting form for lag-free decision making.

The true value of data is in its use. And timely use at that.

Insights being ready for immediate decision making (read actionability) is exactly the type of thing that makes the tiniest daily decisions of editorial teams become data-driven.

Why does making even the smallest of editorial decisions data-driven matter?

Because it is only when all editorial decisions become data-driven that the potential of being consumer-oriented is realized to the fullest. Refined data presented in a digestible format for as many employees as possible converts cross-functional teams into consumer-facing units. Units that would otherwise be only indirectly connected to crucial data insights on how readers engage with textual and multimedia content.

Authors and editors’ inner creative vision and a trained gut feel are always going to help understand distinct audience segments’ needs better than any sophisticated analytics system ever could.

Yet, serving authors and editors with actionable analytics insights is imperative, because that means to move consumer orientation to the very core of an enterprise. Right where it belongs in the first place.

The field of editorial analytics is filled with such conceptual wrongs. Of which not many publishers know too.

Not only conceptual assumptions differ, but also technologies that are used as well as approaches to tracking. Analytics systems almost universally produce different data formats and output conflicting numbers as a result.

In the likes of many other publishers, MittMedia found themselves at a point where they did not know which system’s trackers they were to trust and ultimately rely on.

Their reliance on several analytics systems that produced disparate and conflicting data insights stood in the way of attaining their strategic vision of becoming truly and completely consumer-oriented.

To tackle that, MittMedia did the following:

Having your entire creative and editorial personnel wholly reliant on consumer data is important because that enables consumer orientation on a whole another, exponentially higher level.

When all cross-functional teams and other internal consumers of data insights have access to a single source of truth — that is when a truly reader-centric culture in editorial operations is achieved.

"If everyone is moving forward together ... then success takes care of itself" — Henry Ford

More than 520 of MittMedia’s employees (out of a 1000) across a multitude of offices reference just two ‘guiding light’ solutions.

It is important to have an accessible solution, which authors and editors can use efficiently and with joy. That is, something that is not only easy to understand but also a joy to use. Something that engages editorial employees and stimulates reliance on key metrics’ performance ‘by design.’

The system has to be engaging and not just interactive, so that daily and even hourly use is encouraged 'by design.' That can take on many forms — from dynamically-updated graphs and UI elements to gamified workflows.

There is an abundance of complex analytics tools on the market that are hard to learn and anything but easy to use.

It is important to bypass learning curves and complexity often present in analytics systems if a data-driven culture is to be spread across the entire organization.

"What is the point in having analytics systems if no one uses them because they are so complex?" — Den Golotyuk

In order for an editorial analytics solution to become a guiding reference point and an aligner of efforts across editorial, managerial, tech personnel and cross functional teams, it has to be first and foremost easy to learn and use.

It has to have such visualizations and workflows that both a managing editor, a journalist and a custom news project developer can refer to and obsess over (in a good way) on a daily basis.

That is THE key to spreading consumer orientation across the entire enterprise.

What else is key is read-off speed. That is, how many seconds it takes an editor to access and ‘digest’ a metric’s performance. 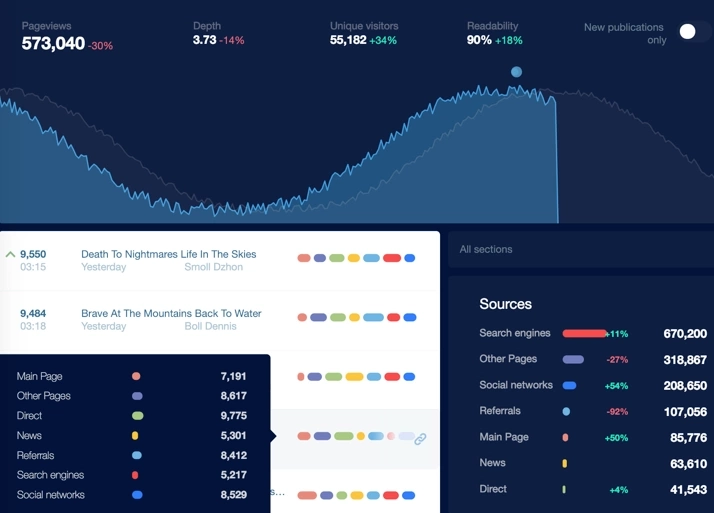 7. C-Suite’s Involvement is a Must

Involvement from the leadership is necessary when it comes to spreading the ‘consumer needs first’ philosophy.

When a managing editor or CEO of an entire media group gives a talk in front of everyone that they are going to rely on such and such a dashboard, and that you should too — then that is going to smoothen and fasten the transition.

Proper involvement from the leadership is a crucial motivator for everyone to take the whole thing seriously.

In the end, it is NOT about how much consumer data you can collect. Nor is it about how much insight you can extract from that data. It is also certainly not about how many analytics tools you have in place.

It is about how well you can transform masses of tracked data into actionable form. And disseminate it across all your personnel, so that every ‘shop-floor’ editorial decision is guided by ready-for-action insight.